On the day marking the 25th anniversary of Hong Kong’s return to the motherland, some sixth-term government officials of the Hong Kong Special Administrative Region (HKSAR) will be sworn in. Recently, China’s State Council approved the list of key officials proposed by the HKSAR government’s sixth-term executive director, and veteran official Chris Tang Ping-keung will continue to serve as Security Secretary. Global Times reporters Chen Qingqing and Fan Lingzhi recently interviewed Tang exclusively. With the implementation of the national security law for Hong Kong, the city has undergone a transition from chaos to stability. However, Tang cautioned that there are still national security risks facing the city, and public awareness and education of young people on national security should be further strengthened. 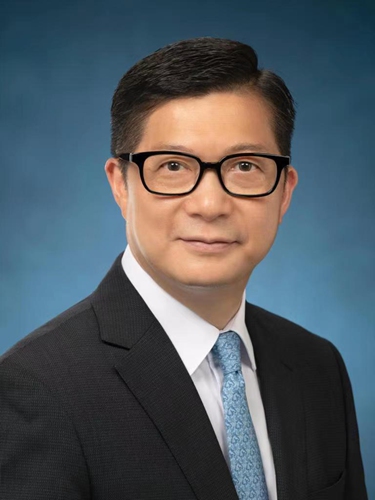 GT: What have been your work priorities since you took office as Secretary of Security and what are your plans for the future?

The violence dressed in black in 2019 fostered local terrorism. The police have solved more than 20 cases related to firearms and explosives, and the HKSAR government has been expanding its capabilities to fight terrorism, promoting public education and establishing the anti-terrorism hotline to counter the risks potential in communities and improve the quality of life for residents. anti-terrorism awareness.

Hong Kong’s national security law helped the city move from chaos to stability. The number of registered criminal cases in the first quarter of 2022 fell 6.2 percent year on year, among which violence-related cases fell 10 percent and robbery cases fell 23.3 percent, both reaching an all-time low in recent years.

Tang：With the development of China, some Western countries view China as a threat and even take a large-scale hostile attitude. Given the unique environment and lifestyle in Hong Kong under the “one country, two systems” principle, some hostile outside forces could easily infiltrate, trying to divide and subvert the country. Those forces also cultivate and advocate “Hong Kong independence,” making national security risks more apparent.

Due to the breach of Article 23 of the Basic Law, the Hong Kong SAR has seen increasing national security risks in recent decades. In 2014, for example, there was the illegal “Occupy Central” movement, and subsequently Mong Kok in 2016. The “Hong Kong National Party” advocating “Hong Kong independence” also seriously compromised public order and security national. Until 2019, we saw large-scale riots that lasted more than 10 months and reached the limits of the rule of law and public order, seriously jeopardizing national security.

The implementation of the national security law for Hong Kong changed the chaotic situation since 2019, as the number of violent activities and those advocating “Hong Kong independence” was greatly reduced. Several organizations that allegedly endangered national security were successively dissolved or ceased to function. Although the law shows a deterrent effect, those who tried to endanger national security will not give up easily, but will wait for opportunities.

Hong Kong still faces some national security risks, including some forces endangering the national security and safety of Hong Kong in continuous “soft confrontation” by spreading information against the central government and against the HKSAR government by advocating “Hong Kong independence”. In 2021, there was a lone wolf-style attack on the police and some intended to plant bombs in public places such as trains and courthouses, which showed that local terrorists and outside forces constantly interfered and defamed the affairs of the HKSAR using the high degree of autonomy. Some figures fled abroad and continued to engage in activities that endanger China’s national security. For example, they ask for foreign sanctions on the city and the country.

GT: What will be the response to these remaining threats to national security?

Tang: The HKSAR government will continue to take a series of measures to deal with those risks, particularly in the following aspects. In terms of intelligence, we will strengthen cooperation with the national anti-terrorist services in the collection and analysis of information, paying special attention to online information. In law enforcement, we will conduct extensive investigations into individuals and organizations suspected of jeopardizing national security, including their financial income, spending, and ties to foreign forces. We will carry out comprehensive coordination with all Disciplinary Services, offices and departments to jointly safeguard national security.

The relevant policy offices and departments of the HKSAR government have also actively established other new laws, regulations and mechanisms to better fulfill their publicity, guidance, supervision and management responsibilities in terms of safeguarding national security. The SIM Card Registration Regulation, for example, aims to guarantee the security of the telecommunications network. The Film Censorship (Amendment) Ordinance 2021 and the Updated Film Censorship Guidelines for Censors came into force, including national security as one of the considerations for the screening of films. The authorities also revised the tax guidelines applicable to charities. If any group supports, promotes or participates in activities against national security, the tax office will no longer identify such activities as a charitable group and will revoke the tax exemption granted under the Internal Revenue Ordinance. In addition, activities endangering national security were included in the Social Worker Registration Ordinance; Any person convicted of any crime against national security cannot work as a registered social worker. The national flag of China and the flag of the Hong Kong Special Administrative Region hanging on the streets of Hong Kong on June 17, 2022 Photo: VCG

Tang: The HKSAR government has been pushing the Article 23 legislation and relevant work. Among the seven crimes prohibited by Article 23, two items (dividing the country and subverting state power) have been covered by Hong Kong’s National Security Law, but other crimes are only partially covered by the Crimes Ordinance, the Official Secrets Ordinance. , and the Social Workers Registration Ordinance. Therefore, the legislation of article 23 is necessary.

We are studying the past, present and even future security risks faced by the HKSAR from what has happened in the past, and we are also examining the experience of Hong Kong’s national security law and relevant court rulings and existing laws to develop effective and pragmatic programs and arrangements to deal with potential risks.

In fact, most jurisdictions have their national security laws that share some similarities. They have broad enforcement powers to enforce their national security laws, for example, and they are an international practice. Most countries have laws on espionage and many others have laws on foreign intervention. The UK National Security Bill has reformed or introduced related offences.

To enhance our abilities to safeguard national security, we will refer to similar laws in other jurisdictions. Some countries with laws covering similar areas of crime, including the UK, the US, Australia, Canada, New Zealand, Singapore, etc., are included in our reference list, with the aim of developing a plan that best suits the actual situation. in HK.

GT: What are the plans for cooperation between the HKSAR government and relevant mainland authorities to safeguard national security?

Tang: We will strengthen information and intelligence sharing with different institutions in the country, and crack down on crimes that endanger national security in an intelligence-based manner.

GT: In the past two years, it has been reported that some Hong Kong rioters who had fled abroad and some residents who emigrated abroad are living poorly abroad. What do you want to tell them?

Tang: Some people even continue to act as foreign agents to discredit and break the law in different matters. The HKSAR government will investigate their criminal liability in accordance with the law and ensure that those who break the law face legal consequences.

I hereby call on those involved not to continue the behavior of these traitors and cowards, but to “step back” from the precipice and discontinue their mistakes. Otherwise, they will be fugitives and law enforcement authorities will eventually hold them accountable.

As for people from Hong Kong who immigrate abroad, I think it is a very personal choice to immigrate or not, but I think that most people who love Hong Kong and the country will choose to stay in Hong Kong and contribute to society. .