At the heart of the UCE platform is the MVISION console. It supports various capabilities, including acting as a cloud access security broker, a secure cloud gateway, an endpoint protection platform, and a data loss prevention tool. We primarily test cloud access capabilities, although the rules we create could apply to the rest of the infrastructure as well.

The UCE platform was surprisingly easy to manage despite the complexity of the demo environment where it was being tested. As a test, I was able to apply a security policy to any application that used the Mail.ReadBasic scope. Once the new rule was implemented, the dashboard showed me how many apps were affected by the new policy. Because the UCE is context-aware, it could configure automatic actions based on almost any situation. 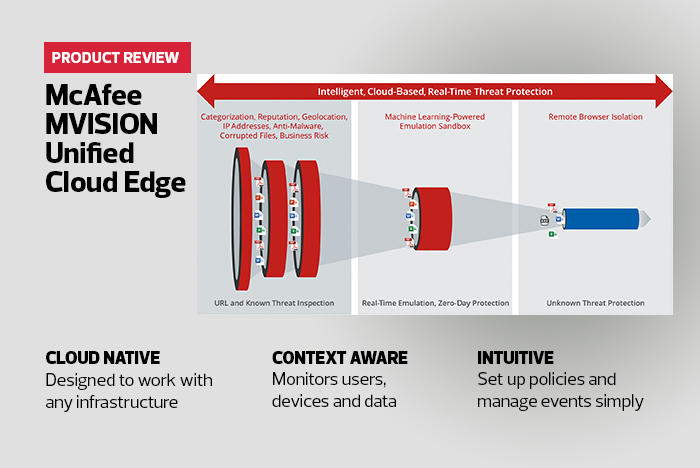 You could, for example, set one policy for a valid user on a personal device and another for a valid user on a corporate-owned resource. Some of the many possible actions available included revoking access, forcing users to interact through an isolated browser, and forcing a security update to bring a device into compliance.

The remarkable thing about mcafee UCE is that because the entire platform is context-aware and because administrators can fine-tune access and permissions based on that context, it provides a bridge to a zero-trust environment. At least for cloud applications, universities can leverage UCE to provide the strongest possible zero-trust protection in today’s increasingly dangerous threat environment.

TO FIND OUT: Preparing the security strategy of higher education infrastructure for the future.

To test how the McAfee MVISION UCE platform handled various scenarios, I configured several fine-grained rules for applications, users, and processes. In all cases, the UCE handled the traffic exactly as I specified. Every time it did something wrong, it was because I didn’t set the rules correctly.

Working with UCE is fairly straightforward, but since managers basically set up a zero-trust environment, it can take a bit of time to learn all the nuances of what this powerful program can accomplish. McAfee can offer training to accompany new deployments.

In the first scenario, a valid user with all the correct passwords attempted to access a simulated network on a personal device. Per our policy, the user was granted full network access, but was prevented from downloading or uploading files as a personal device not controlled by the entity was being used.

A second user was also valid and working on an asset owned by the organization. However, the security patches were not up to date, so the device was not compliant with my security policy. In this case, the UCE gave the user the option to interact with the site using browser isolation (so it couldn’t actually affect the network) or to apply all the patches and then, after the UCE verified that they went back to comply, access everything normally. . It is worth noting that assets owned by the organization should have a UCE agent running on them to verify policies and provide better monitoring.

Another valid user with an organization-owned device had active malware on the system. The user was denied access to the network and had future access revoked until a human administrator could verify that it was safe for the user to return.

In addition to managing users, McAfee UCE can also enforce rules on how cloud-based applications communicate with each other or what happens when a previously unknown application tries to access network resources.

Managing everything related to cloud deployments, data, and access from a single program is easily possible through UCE. In all tested scenarios, the ECU performed exactly as requested. This eliminated many vulnerabilities in the cloud-based sandbox, ensured they were kept out of the way, and allowed full control of an entire cloud infrastructure from a single, easy-to-use console.